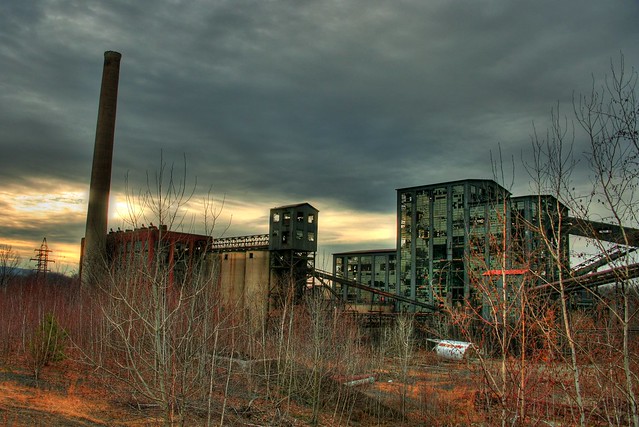 Built in 1937-1938 by the Glen Alden coal Company, the Huber coal breaker utilized state-of-the-art washing and separating technology to process the output of several collieries into 7,000 tons of marketable coal daily.  The highly efficient breaker delivered purer coal in smaller sizes, a product in high demand in the 20th century. The facility could not overcome strong trends in the energy industry – including competition from other energy sources and the switch from shaft to strip mining, which required different processing technology.  So after nearly 40 years of operation, the breaker was shut down in 1976.

This important industrial property was documented by the Historic American Engineering Record in 1991 and determined eligible for inclusion in the National Register of Historic Places in 1993.  The Huber Breaker Preservation Society, whose mission is to provide for the preservation of the Huber Breaker and for its adaptive reuse as a historic site and park, has been working for decades to preserve the property.    They hold clean-up days at the site and are building a memorial park where they will interpret its history.

Despite the fact that the Borough of Ashley, Luzerne County, and several area organizations have been supportive of its preservation, the Huber Breaker remains at risk today.  The company that owns the property is currently in bankruptcy.  The very real and imminent threat is that once the bankruptcy proceedings are finished, teh breaker may be sold for its estimated $400,000 value in scrap metal, with additional revenues generated by the mineable coal under the property.  Recongizing this threat, the deteriorating Huber Breaker was identified by leaders of historic and preservation groups as the most endangered historic landmark in Luzerne County in 2012.  If the property is to be saved, it must be acquired soon by a new preservation-minded owner with the resources to take on the monumental task of stabilizing and rehabilitating the property so that its story can be told to the public.  These needs certainly pose an additional challenge.