PART 3, THE FINAL PIECE IN THIS 3-PART SERIES of working on your old home explores using a good design. Using a good design refers to integrating additions, renovations, or even new construction into your historical building, not necessarily “copying” historical architecture contemporaneous to your building’s era. It simply needs to integrate with the historical representation of your building and the surrounding neighborhood.

Photo by J. Remus on Unsplash

For example, many historical buildings have been carefully designed to address water and moisture issues by “breathing” the moisture out, as well as shed it carefully down the exterior of a house in a way that avoids water permeation as it moves down the house. If your project does not use a design that works in the same manner, water will begin to penetrate your building and lead to fungal deterioration, which in turn will lead to major expenditures and repairs, if not complete loss of some of your building’s features. Another common bad design seen during restoration on historical buildings is the use of non-sloping window sills that do not shed water, and can lead to maintenance nightmares. Having a design for your project that not only embodies the architectural character of your building, but also addresses critical compatibility issues (such as water-shedding) is key to preventing corrosive damage to your building.

PART 2 OF THIS SERIES of working on your old home explores replacement in-kind. Replacement in-kind refers to replicating the original in all respects except improved condition, when absolute preservation is not possible. This is a follow-up to Part 1’s general information about maintaining your home’s historical relevance and period style. Regarding replacement, it is easy to think that if the look of a historical building is maintained, as well as the types of materials used, then the building has been successfully preserved. But preservation is not just about preserving how something looks, it is primarily focused on preserving how something is, so that it remains as original as possible for future generations.

Photo of Keperling Preservation Services’ completed work on the Harris Mansion porch in 2014, which necessitated some replacement in-kind.

As important as it is to preserve how our historical buildings actually are, inevitably replacements will need to be made when features are so deteriorated that stabilization, conservation, or restoration are simply not viable options. In these instances, the National Park Service’s Standards for Preservation and Guidelines for Preserving Historic Buildings allow for “replacement in-kind” (replicating the original feature in all respects, except improved condition) if there are surviving features that can be used as prototypes. The Standards & Guidelines also notes that, “The replacement materials need to match the old both physically and visually, i.e., wood with wood, etc. Thus… substitute materials are not appropriate in … preservation.”

Using similarly styled or patterned ceramic tile to replace a terracotta tile, using a different wood when replacing cabinetry, removing wallpaper in favor of uncovering the plaster walls, using shingles that are of a different dimension, are all changes that can easily be made in ways that are in keeping with your building’s period of significance. Yet doing so can be confusing to anyone researching historical architecture by suggesting these features (or aspects of them) were there during the building’s period of significance when, in reality, they weren’t.

Further, removing these features permanently alters your building’s historical fabric, sometimes irretrievably. Original wallpaper that is often destroyed during the removal process can’t usually be replaced with in-kind period wallpaper. Replacing one species of wood with another sometimes can’t be undone if the original species of wood is not readily available, or is priced so exorbitantly that it is not financially feasible for your project. In order to avoid significant, and sometimes irreparable, damage to your building, consider replacing only the deteriorated or missing parts of your building’s features, use materials that match the old in design, color, and texture (both physically and visually), and document the original material and the replacement process and materials used extensively for future reference and research.

Next week: PART 3 OF THIS SERIES focuses on using a good design.

PART 1 OF THIS SERIES of working on your old home explores options for property owners to save the home’s historically relevant aspects specific to when and how it was built, versus mixing time periods and styles. Maintaining your home’s historical relevance necessitates preservation and restoration tactics that honor the home’s appropriate time period. If too much of the historic fabric is lost (e.g., removed or replaced), the methods and materials that make a historical building special are also lost. At a certain point so much may be lost that the property becomes “just” an old building. 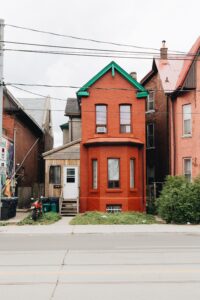 Photo by Joel Filipe on Unsplash

There is over 400 years of architectural history in the United States, including a diversity of styles as rich as the diversity of our people. Early Colonial architecture still intact today displays magnificent examples of the Spanish and English influences prevalent when European settlers first immigrated here. Revolution period buildings demonstrate the forging of a new nation with Federalist and Jeffersonian features. Homes and buildings from the mid 1800’s through the early 1900’s capture the two “moments” in American time that define the experience of our culture’s Revival Period and Gilded Age.

Historical materials, and the craftsmanship used when working with those materials, are easily damaged by modern renovation attempts – even when your intention is focused on preserving your building’s features. For example, using a power sander while restoring original wood that was hand-planed will result in woodwork that can never again reveal the same character as the original woodwork did. Painting wood flooring in a house from a period when a wooden floor would never have been painted is something typically considered reversible, but isn’t always if the wrong paint is chosen or when the removal of the paint causes significant damage to the original flooring. Original porches (and other projections), building footprints and materials, period layouts and unique features can all be altered to the point of no return while adding living space meant to bring a historical building in line with more modern functional style (i.e., failed reconstruction attempts). Removing original wallpaper, or installing wallpaper on a house from a period when wallpaper wasn’t used, isn’t just affecting the aesthetic integrity of a historical house – it can permanently damage the original plaster walls behind it.

If your ultimate goal is to maintain the historical integrity of your property’s time period, focus on preservation (focuses on the maintenance and repair of existing historic materials and retention of a property’s form as it has evolved over time), restoration (depicts a property at a particular period of time in its history, while removing evidence of other periods), or even reconstruction (re-creates vanished or non-surviving portions of a property for interpretive purposes) if possible or necessary. Essentially, avoid making changes that may try to make it appear older, newer, or fancier than what it really is. Even small, subtle changes can permanently damage the integrity of your building. The National Park Service details these options further in terms of standards and guidelines for treatment of historic properties (https://www.nps.gov/tps/standards/four-treatments/treatment-restoration.htm).

Next week: PART 2 OF THIS SERIES focuses on replacement in-kind.