This article is a part of a series from the Pennsylvania Historical and Museum Commission’s excellent field guide on the architectural styles found in Pennsylvania.  In it, they’ve assigned key periods of development – from the Colonial period in the 18th Century to the Modern Movements of the 29th Century.  This article focuses on an overview of the Traditional/Vernacular style in Pennsylvania from 1638 through 1950 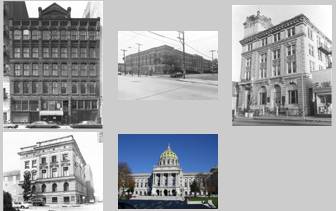 The Beaux Arts style, named for the premier French school of architecture, the Ecole des Beaux-Arts, was introduced to the United States by American architects like Richard Morris Hunt who attended the prestigious school in the late nineteenth-century.  Hunt designed the Newport, RI mansion of Cornelius Vanderbilt, “The Breakers,” in this style in 1892.  The Beaux Arts style was most often seen in places where turn-of-the- century wealth was concentrated, major urban centers and resort communities.  The popularity of this style was advanced by the World’s Columbian Exposition in Chicago in 1893.  With its grandiose treatment of classic architectural forms, the Beaux Arts style was seen as an ideal expression of both corporate or wealth and civic pride.  Buildings of this style are both formal and monumental with abundant and opulent decorative details.  The Beaux Arts style is especially suited for public buildings designed to deliver a strong symbolic message, such as libraries, museums, court houses, train stations, and government offices.   Privately owned Beaux Arts style mansions delivered a message as well, one of personal wealth.  This style was popular in an era of great American palace building marked by eclectic use of historic architectural themes and elements.

The Beaux Arts style uses formal symmetry, Italian Renaissance form, and  classical Greek and Roman decorative elements like columns, pediments and balustrades to create a grand and imposing architectural statement.  Exterior decorative details include may include quoins, balconies, terraces, porches, and porticoes as well as ornamental windows and grand entrances. This style also featured lavish interiors including pilasters, arched openings, elaborate chandeliers, coffered ceilings, or marble fireplaces.   The State Capitol Building in Harrisburg ,completed in 1906  and  designed by Josephf Huston, is a penultimate example of this style.  Envisioned as a “palace of art,”  the Capitol building has opulent detail and classically inspired design.  Described by President Theodore Roosevelt at its 1906 dedication as “the handsomest State Capitol I ever saw,”  the State Capitol is Beaux Arts style architecture at its most extravagant.   Other examples include private mansions and a vast array of public buildings, courthouses, libraries and offices.