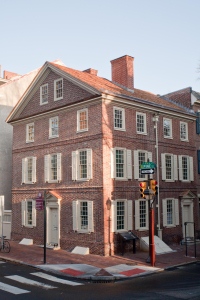 Thomas Jefferson once called Thaddeus Kosciusko “as pure a son of liberty as I have ever met” – quite the compliment from revolutionary Thomas Jefferson.  It is for that spirit, as well as his efforts engineering forts and defense tactics up and down the East Coast during the Revolutionary War, that we’ve memorialized the boarding house where the Polish freedom fighter lived briefly in Philadelphia.
A true revolutionary, Kosciuszko’s career in freedom fighting spanned multiple countries and several continents.  Kosciuszko fought for freedom in his home country of Poland (where he helped instigate and lead the Kosciuszko Uprising against Russian domination), Europe, and the colonies in the American Revolution.
On the corner of Pine & 3rd Streets in Philadelphia, the row home we’ve memorialized in his honor was the boarding house Kosciuszko chose to stay in because it was “a dwelling as small, as remote, and as cheap” as his secretary could find for Kosciuszko.  And at only .02 acres, it’s America’s smallest National Park.
Small in stature in may be, but its sizable spirit lives on.

In late 2011 and early 2012, Historic Restorations worked with the National Park Service to restore and repaint windows and doors that had started rotting from moisture issues.  The earliest windows in the U.S. were casement windows that were hinged on one side and swung out, with double-hung sashes that slid up and down like those on the Kousciuszko house first making their appearance in the early 1700’s.
Over time, and particularly if not maintained properly, historic wood windows will deteriorate rapidly if exposed to excess moisture.
To restore historic windows that have fallen victim to moisture, we follow the Secretary of the Interior’s “Standards for Rehabilitation” that call for considering not just aterials and measurements, but also the functions of the windows – how much light the windows provided, how much fresh air and ventilation they provided, the visual link they provided to the outside world, and how they enhanced the appearance of the building.
For the Kosciuszko windows, this meant using solid wood and epoxy systems to repair the moisture damage on the wood window frames, sashes, doors, and shutters and restore their appearance and function to original condition to prevent further deterioration.

We also replaced the cedar shake roof at the Kosciuszko house.  For buildings on the National Historic Register, the “Standards for Rehabilitation” developed by the Secretary of the Interior outline the requirements for repairing or replacing architectural features on historic buildings.  These require matching not just the size, shape, and textures of the shingles themselves, but the craftsmanship details added during manufacturing and installation that characterize the roof.
For the roof at the Kosciuszko house, we started by matching the historic shingles with an appropriate, hand-crafted, replacement product.  In replacing historic roofing, the most important features to replicate include the quality and surface texture of the wood (although the species can sometimes be acceptable to substitute), matching the size and shape of the tiles, reproducing the installation patterns (which vary geographically), and duplicating any decorative features (like butt patterns, color, exposed nails, etc.).

To do this at the Kosciuszko house, we turned to Lloyd Clefstad at Lloydco International Wood Products in British Columbia for hand-split, custom-ordered, cedar shakes. Clefstad split all of the shakes by hand using traditional tools.  Click here to watch a video of how he does it!
After approval of the materials from the National Park Service, our artisan craftsmen set about the task of recreating the installation of the cedar shakes.  This require detail-oriented craftsmen who are accustomed to looking for and paying attention to the smallest details that all add up to create the character of the original architectural feature.  Artisan craftsmen are not just looking at the materials needed, they are using their knowledge of historical craftsmanship to take into account how the installation of the original added to the overall character so they can duplicate it in their replacement or restoration.
After all our repairs and restorations were complete, the Thaddeus Kosciuszko Memorial was not only returned to its original stately glory, it was fortified against further moisture damage and energy loss.
*After photos by PhotOle Photography