Menu
Lancaster County is not normally the place one thinks of when considering social experimentation.  Yet that is exactly what The Drogaris Group and Garden Spot Village are doing with the Lancaster Press Building that sits on the corner of Prince and Lemon Streets.
The 100-year-old, massive brick building was originally built as a cigar factory in 1907.  The building served as a cigar factory until 1922 when it was purchased by Lancaster Press Co., to house their printing operations.  For the majority of its life this was the building’s use, until 1992 when the printing company moved and the building sat empty until a packaging firm used the building between 1997 and 1998.  From 1998 on the building has been empty and abandoned.
In 2006 the building was purchased by the Drogaris Group, who is partnering with Garden Spot Village to create a unique retirement community for those 55+ who want to live in an urban setting.  To honor the building’s history and the architectural features that give the Lancaster Press Building its character, Historic Restorations is working with the Drogaris Group to restore window sashes, windows, door jambs, a custom-built Sapele transom, and a  4’ wide X 7 ½’ high wood door using insulated glass and traditional joinery to showcase the building’s potential in a model living space. 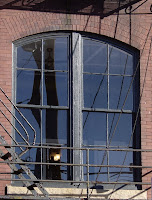