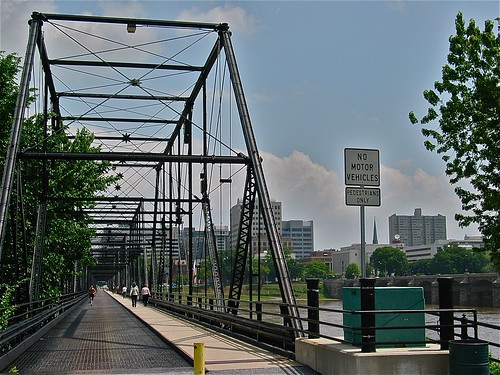 Erected in 1889-1890 and comprised of 15 wrought-iron, steel pin-connected Baltimore truss spans, the 2,850-foot Walnut Street Bridge (or People’s Bridge) was one of the largest multi-span truss bridges ever fabricated by Pennsylvania’s nationally significant Phoenix Bridge Company using their patented Phoenix column.  By 1893, the toll bridge carried trolleys that transported passengers between the west shore of the Susquehanna River and the state capital, as well as foot traffic and horse-drawn vehicles.  The bridge also enabled recreational development on City Island in the early 20th century, including baseball, football and track, as well as picnicking, swimming and boating.

With evolutions in popular modes of transportation and periodic damage from storms and floods, owners of the Walnut Street Bridge have dealt with minor structural problems since about 1910.  After overcoming resistance by the private property owner, the Commonwealth finally acquired the toll bridge in 1954.  They continued to collect tolls on the bridge until 1957.  The bridge was listed in the National Register of Historic Places in 1972.  That same year, flood waters from Hurricane Agnes caused severe damage to the bridge, and it was closed to vehicular traffic.  However, the bridge survived as an important pedestrian link between the west shore, City Island, and Harrisburg’s downtown commercial district.  The Walnut Street Bridge was one of the longest pedestrian bridges in the world.

In January of 1996, the Walnut Street Bridge was again seriously damaged by ice-dammed flood waters.  Three metal trusses were destroyed, and the piers that had supported them were removed.  Overwhelming local support and extraordinary stewardship by the Commonwealth resulted in the rehabilitation of the remaining eastern spans, which provide pedestrian access between downtown Harrisburg and City Island facilities.  The bridge is used by over one million visitors, tourists, and residents each year.

There are no plans to replace the three missing spans to reconnect the Walnut Street Bridge to the Susquehanna River’s west shore.  The City of Harrisburg, which is responsible for the maintenance of the bridge, is currently unable to devote financial resources to this project.  Fortunately, a coalition of residents, area businesses, and other partners, known collectively as Lighten Up Harrisburg, is working to illuminate the historic Walnut Street Bridge and address other urgent safety needs.

To support this project, please visit Lighten Up Harrisburg.

In 2008, metal truss bridges statewide were recognized by Preservation Pennsylvania as an endangered resource; many truss bridges were at risk for replacement due to strength deficiencies, size limitations, deferred maintenance and the high cost of repairs.  In 1996, 328 truss bridges in Pennsylvania were eligible for or listed in the National Register.  Following the Commonwealth’s “Accelerated Bridge Program,” that number was expected to decline to 237 by the end of 2008 and just 184 by the end of 2012.  While not all metal truss bridges can and should be saved, some may be strengthened to continue to serve the community.

In reaction to concerns about the shrinking population of metal truss bridges in Pennsylvania, PennDOT is currently working to develop a management plan to help maintain the bridges and prioritize select bridges for rehabilitation rather than replacement.  The plan seeks to balance sound engineering with historic preservation considerations in evaluating the level of significance and the rehabilitation potential for each bridge.  PennDOT anticipates that the plan will be an invaluable tool to be used throughout their planning and project development process.