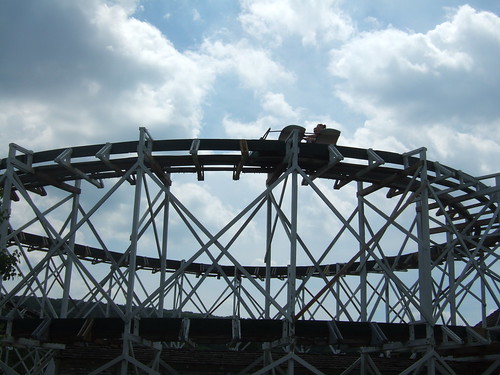 Amusement parks first appeared in the latter half of the 19th century and quickly became a common and significant form of popular recreation.  The development of the roller coaster occurred parallel with the development of the amusement park and was signature attraction at nearly all parks.   Erected in 1902, Leap-the-Dips is the oldest standing roller coaster and the last known example of a side-friction figure-eight roller coaster in the world.  In its heyday, it was one of approximately 250 of its type.  Because of this remarkable significance, Leap-the-Dips was listed in the National Register of Historic Places in 1991 and was designated as a National Historic Landmark in 1996.

Leap-the-Dips was closed in 1985.  It was listed in Pennsylvania At Risk a decade later, its condition having deteriorated significantly as a result of insufficient maintenance.  The nonprofit Leap-the-Dips Preservation Foundation, Inc. formed to preserve and restore the coaster.  They began fundraising in 1995, raising more than $100,000 in donations and approximately $225,000 in grants, including $100,000 from the Pennsylvania Historical and Museum Commission.  The remaining $650,000 needed for the restoration of the roller coaster was borrowed from 10 different sources.  Restoration began in 1997 , and Leap-the-Dips reopened at Lakemont Park in 1999.  Today, the Foundation and owner Leap, Inc. work together to operate the ride from May through October and preserve it for future generations.  Proceeds from ridership, fundraising and merchandise sales are used first to pay the debt and then to support operation and maintenance of the historic roller coaster.

To support the Leap-the-Dips Preservation Foundation and Leap, Inc., go to Lakemont Park and ride the roller coaster!