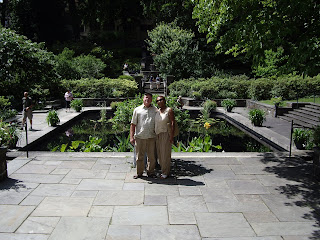 Yesterday, Sunday, August 3rd, Jonathan and Danielle took Chuck and Lois to Winterthur (Wintertour is the pronunciation given to us on the tram tour)for their 35th wedding Anniversary. Winterthur is located in Delaware and is the vision of Henry Francis DuPont (he expanded the existing house on the property into a museum and then opened it up to the public). In addition to the house dedicated to preserving America’s history through a collection of decorative arts including furniture from many different time periods up until 1860, china, pottery, silverware, and the period rooms many of which have been taken out of buildings that were being demolished serving as a backdrop to the antiques) there are hundreds of acres of gardens to walk and enjoy.

The most impressive feature we saw (we only took two tours of the house and want to go back and see the rest of the house) was the Montmorenci staircase (three floors of spiral stairs unsupported) built from the design of a southern staircase purchased by DuPont. The staircase is supported internally by concrete and metal but to stand at the bottom and look up three floors to a complete 360 degree turn is worth the trip to Delaware if that was the only thing you would see. But that is not the only thing to see there are nine floors and over a hundred rooms full of antiques and a record of America’s history through the very items that were used everyday by our forefathers.