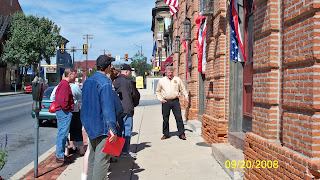 On Saturday, September 20, 2008 we presented “How to Approach Work on Your Older Home” to a group of interested homeowners in Columbia, Pennsylvania. We discussed avoiding common mistakes, how to make an older home more energy efficient, and how to plan for the work. After we finished the question and answer segment Chuck offered to take anyone who was interested to go outside to look at some of the mistakes made (previously, such as, sandblasting and using Portland Cement based mortar) on the Columbia Market House and the maintenance tasks that can be completed to help preserve the building. The preservation fair was sponsored by The Borough of Columbia and the Historic Architectural Review Board through the support of The Richard C. von Hess Foundation.