Menu
You hire Reserections.  If you want to have any hope of actually moving the castle a thousand miles (without the post office, the moving company, and the airlines losing a few packages and offering you a complimentary Starbucks to say “Sorry!”).
Based in Ohio, Reserections specializes in documenting, marketing, and disassembling architecturally unique historical homes.  Supporting the idea that “The Greenest Home is the One Already Built”, disassembly and relocation protects the embodied energy of structures (you know, the energy that can never, ever be regained – so it’s like taking throwing away a tank full of heating oil you already purchased just so you can fill it with new heating oil).
They carefully disassemble the homes, preserving all the key components, interior framing, exterior stone facades, roof slates, and any other recoverable materials.  (And they ship to anywhere in the world, so you could have a castle resurrected on that remote island you purchased last week.)
Currently they are offering five stone mansions, all built during the American “Gilded Age” of the Post-Civil War 1800’s, they all reflect the Richardsonian and early Beaux-Arts Classicism typically seen in the homes of the wealthy during that time.

But exactly how do they do it?

Here’s how they disassembled and relocated the 1885 Kemper Castle from Ohio to Texas.  Built by an Ohio Industrialist, the 6,200SF castle has 23 rooms, 7 bedrooms, 7 full baths, and 6 fireplaces.  (Just a bit bigger than your average beach house.)

First, all the interior components that could not be recovered were removed… plaster, drywall, etc. – leaving only the exterior walls, framing, joists, studs, and flooring.  Then the slate roof was removed and the slate recovered and packed in straw for shipping.  After 120+ years, the extremely valuable slates showed very little signs of wear.

Once the roof was gone, it was time to remove the peak of the turret.  The turret weighed 7,300 pounds. 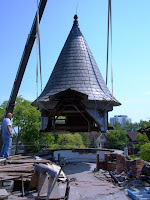 With the peak removed, the house is ready for the removal of the stone facade. 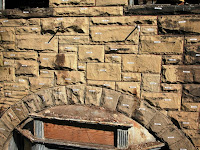 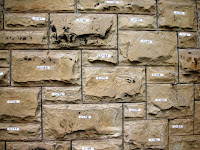 As the stones are removed from the house, they are renumbered with permanent markings and packed in containers built on pallets for shipment.

When originally built, the stone facade was layered over and interleaved with three courses of brick and mortar which constituted the main structure of the house walls.  In addition to the surface stones, there were many monolithic stone components that were carefully removed, some weighing over 4,000 pounds. 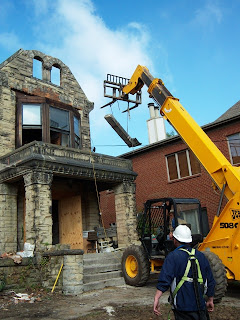 The Final Stones Coming Down 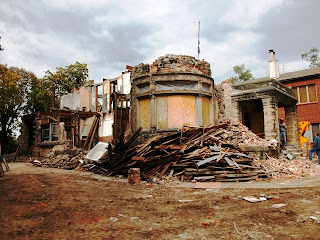 The stones are palletized and trucked to their destination in Texas where the Kemper Castle will find a new home.  This flatbed load weighed over 40,000 pounds.

Finally…. a half acre empty lot ready for development and the Kemper Castle finds a new home in Texas. 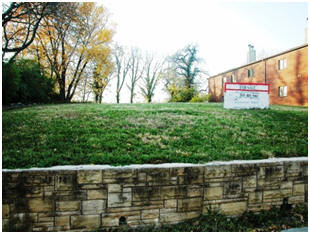