We’ve been talking a lot about the recently released Preservation Primer, Volume 1: Avoid Common Mistakes that Cause Irreversible & Costly Damage to Your Historical Building’s Architectural Integrity and thought you might want to know more about the father/daughter preservation team that authored the book – our very own Chuck and Danielle.

Get to know Chuck Groshong 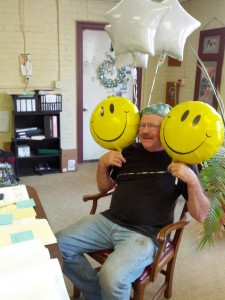 Born in Oregon in a year we won’t mention, Chuck had a very “All American” small-town childhood.  The oldest of 11 children (no, that isn’t a typo) he says he was a very innocent, shy, and sensitive boy who was very much into playing sports – wrestling and football in particular.

After high school he joined the Marine Corps to take advantage of a free college education.  While in the Marine Corps, he served in Vietnam from 1970-1971 – an experience he says drastically changed him.  “It was very different from the world I knew in my childhood.  In Vietnam I learned more truth about our government, racism, the Civil Rights movement, politics, patriotism, and the world at large than I ever did in school.”

Do “shy and sensitive”, “into sports”, “innocent”, and “joined the Marine Corps and served in Vietnam” strike you as an odd combination?  That’s our Chuck – an unusual, unexpected, and unique combination of the seemingly incompatible.

But Chuck and his quirks are no accident.  During his time in Vietnam, Chuck remembers consciously deciding he wasn’t going to live his life by the values and standards of the culture he was raised in.  “I realized that I didn’t have to approach life through the lens of stereotypes and generalizations.  So I decided that I would choose a path of specificity – judge people, places, situations individually and based on their own unique circumstances. “

Chuck began that new path for himself by heading off to college after being honorably discharged from the Marine Corps in 1971.  There he spent a few years studying “pretty much a little bit of everything” – liberal arts, art appreciation, quadratic equations, world geography, sociology, composition, history to name a few.  He even did well with debating – something he enjoyed just for the sake of debating.

“I was still pretty screwed up and unstable, which is probably why I didn’t settle down into anything specific.”

(We suspect there was more to it than that.  The Chuck we know and love is a curious guy who likes to learn about a lot of different things, and it’s a trait that those who know Chuck say has always been what has made Chuck the person he is.)

That settling down bit took Chuck awhile to master.  As a young man, Chuck says he was “pretty cocky and an out-of-control rebel – but not to change the world, I just didn’t want to be like the world.”  But Lois, lots of practice, and then his daughter Danielle worked their magic and somewhere in his 30’s Chuck says he finally managed to settle down. 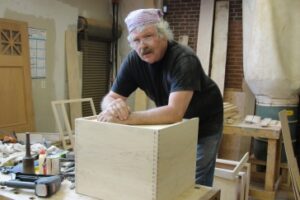 “Now I’m at peace with myself and there aren’t too many things in life that scare me.  I am completely settled and have carved out the life I want for myself.  I never aspired to be rich or “move up in the world” or any of the other typical aspirations of mainstream America.  My aspirations were of a higher level – creation of beauty, taking care of the people I love, being challenged on different levels, and to continue the evolution of myself.”

And one of those things about himself that he continues to evolve are his mad grilling and cooking skills.  (Take it from someone who has been lucky enough to dine on some fare grilled up by Chuck – the man can grill!)

“I think carpenters are excellent cooks because they like to build things and approach that building from the perspective of analyzing how all the individual pieces to need to be put together to get the finished product they envision.”

Sage insight from our resident sage.

Chuck likes to fish too and one of his fondest fishing memories is the time he caught a 50-pound Lingcod.  “You just don’t find them that big anymore, they’re no more than a few pounds each.”

He prefers to fish the lakes of Colorado and doesn’t fish just any fish.   “Some fish that fisherman like to target these days are historic and over a hundred years old.  Why would you disturb fish like that?”

Yet another sage point to ponder – one of the many that Chuck offers up.  Spend just a day in his presence and he’ll offer you no less than two or three thought-provoking points to mull over – a gift that results from his contemplative approach to life.

As for the rebel Chuck…”Well, I do still like to debate and I can do a number on somebody’s head sometimes – though it’s no longer just for the sake of arguing but is more persuasive debate based on my values and beliefs.”

Now, heading into the “grand finale” of life he focuses his attention on building the business he started and values staying active in something he believes so strongly in – historic preservation.  “You know… I’m not quite ready to leave yet.  I’m still looking forward to what life has to teach me.” 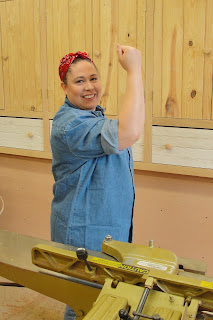 Born a natural tomboy in Denver, Colorado, Danielle’s early life was spent following in her Father’s footsteps – figuratively and literally.  Danielle recalls a photo of her at age two where she is wearing her Dad’s work boots and carrying his lunch box, fully prepared to go to work. “I wonder if that picture was a harbinger of things to come,” she says both with a laugh, and in all seriousness.

(And those of us who know Danielle don’t doubt for a second that even at age two, she really would have accompanied him right into work, fully prepared to pitch right in and get to work!)

“By the time I was in Middle School, I would help him clean the shop on weekends to spend time with him, sometimes I would even make wooden plugs,” says Danielle.

Danielle may have inherited a penchant for all things shop-related and a work ethic from her Dad, but she was born with an innate thirst for knowledge.  (Winnie the Pooh once asked Danielle, “Did you ever stop to think, and forget to start again?”  Danielle patted his head and offered him more honey.)

At the age of 11, Danielle migrated to Lancaster County, PA with her parents, where she began her long and lustrous career of educating herself.  She attended private Catholic grade schools and graduated from Lancaster Catholic High School.  After which she studied Culinary Arts and Restaurant Management at HACC and then completed her Organizational Leadership degree in 2009 at Eastern University.  In late 2011 she graduated with a Masters in Business Administration from Eastern University as well.

While she very much values her formal education, Danielle notes, “Real life eamples and experience have always been the ‘best’ teacher for me, which is one reason I did not feel as comfortable in a traditional college setting.  After all, my first ‘college’ experience was people that brought their real life experience to the ‘class room’.”

And believe it or not, she uses both her Culinary Arts education and her business education to this day.  As Chief Operating Officer at Historic Restorations and as a pastry chef at Byers Butterflake Bakery in Leola.

“I wanted to be a social worker until my senior year of high school when I had the revelation that I could not, in fact, save the world (or even, failing my saving of the world, just bring all the unwanted children home with me).  One day I was home from school sick with wisdom teeth, saw a commercial for a pastry arts program and decided that is what I wanted to do,” Danielle says.

And she could rivet too.

That is indeed our Danielle.  Not having any interest in being anyone but herself, Danielle is funny, creative, decisive, determined, quirky, educated, and sharp.  So smart, we’re pretty sure we’ve seen tacks bow to her as she passes by them in the office.

In her spare time, when she’s not intimidating the office supplies, Danielle can be found reading, watching MSNBC or reality TV, helping friends, working in the community, or working on her master plan for world domination as she belts out her theme song – The Gambler by Kenny Rogers. 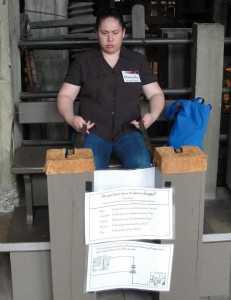 Danielle pulls from all these strengths, her work history, and her education in her daily management of Historic Restorations’ operations, working hard towards good stewardship of our collective built history – the most rewarding part of what Historic Restorations does for Danielle.  ”My favorite quote points out that we are only on this planet for a short period of time, how we care for and preserve our history is a legacy for for future generations,” she says.

“Like people, houses are created, live, and grow old.  Like us, they eventually disappear.  Houses that survive to be studies, explored, and admired by distant generations should be regarded as emissaries from another time, as gateways into our past.”

By Jack Larkin in WHERE WE LIVED: Discovering the Places We Once Called Home, The American Home from 1775 to 1840

But it’s only one of the legacies Danielle is working on leaving behind.  As a strong woman in a male-dominated field, she faces daily challenges in her career.  She says that while she does believe things are changing for women in construction, they still have to work a little bit harder and know their “stuff” a little bit better to get respect.  ”I don’t know how many men get winked at during a project meeting for knowing the right answer…. but I bet it’s not as many as me,” she says with a laugh.

She advocates for women in business to be supportive of other women in business by sharing stories and providing information, helpful resources, guidance, and support.  ”I’ve enjoyed reading books about women that have overcome obstacles and paved the way for my generation.  Including Personal History by Katherine Graham (the first woman to lead a Fortune 500 company after her father died), and If You Don’t Have Big Breasts, Put Ribbons on Your Pigtails: And Other Lessons I Learned from My Mom by Barbara Corcoran (who built her real estate empire with a $1,000 loan),” she notes.

So what does the future hold for Danielle?

“Babies, more puppies, penguins, teaching on the college level, a pygmy hippo, who knows?  I am waiting for my crystal ball to arrive – it has been back ordered for awhile now.”