Preservation Pennsylvania has released their “Pennsylvania At-Risk: Twenty-Year Retrospective of Pennsylvania’s Endangered Historic Properties, Where Are They Now” edition.  It’s a fascinating look at preservation in action and we’ll be posting a look at each property in a series of posts over the next several months.

INTRODUCTION
Preservation Pennsylvania established the annual Pennsylvania At Risk list in 1992, making us the first statewide preservation organization in the United States to have an annual roster of endangered historic properties. Since 1992, we have listed and worked to
preserve more than 200 endangered  historic resources, including individual buildings, historic districts and thematic resources statewide. For 2012, as we celebrate the 30th anniversary of our organization, we are presenting a 20-year retrospective edition of Pennsylvania At Risk. In this issue, we revisit some of the amazing historic places across the Commonwealth, some of which have been rescued from extinction through preservation and rehabilitation efforts, and others that still need our help.

Approximately 18% of Pennsylvania’s At Risk properties have been lost,  having been demolished or substantially altered. Another 32% have been saved or are in a condition or situation where the identified threat no longer poses a problem for the historic property. Approximately 50% of the 201 At Risk resources remain in danger, or we have not been able to confirm their current status as either saved or lost. 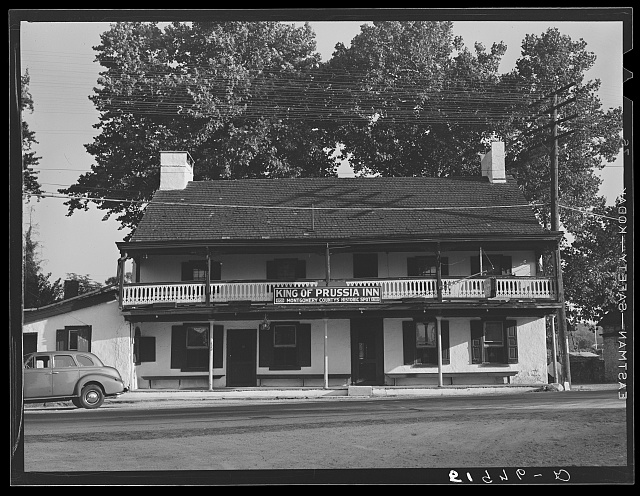 Built in 1719 at a rural crossroads, the King of Prussia Inn operated as a tavern for approximately 200 years, giving rise to the community that still bears its name.  In 1952, the Pennsylvania Highway Department (now PennDOT) acquired the former inn in order to make roadway improvements to Route 202.  Because of the high cost and engineering challenges associated with moving the large stone building, it sat idle and boarded up, deteriorating in the median strip of Route 202 for nearly 50 years.

After years of planning and negotiations, a plan was developed to relocate the historic building.  The King of Prussia Chamber of Commerce secured a new location for the inn and committed to rehabilitating and maintaining it.  The Federal Highway Administration and PennDOT paid $1.6 million to move it.  PennDOT’s Engineering District 6-0 assembled a team of consultant who carefully planned the relocation effort of the 580-ton building.  They braced the inn with limber, metal plates and steel cables, and used computer-controlled jacks fitted beneath I-beams that held the structure to lift it off the ground, and moved it inch by inch to its new site.  Thanks to the joint effort of Pennsylvania’s transportation and historic preservation communities, today the Chamber of Commerce occupies the relocated King of Prussia Inn.

For more information on relocating the King of Prussia Inn, read PennDOT’s article on the project.

HISTORICAL BACKGROUND OF THE INN
From the National Park Service

Pennsylvania was still a British colony when the King of Prussia Inn was built in 1719 at the intersection of Swedesford and Gulph Roads. Though that building was but a small farmhouse, the house later grew to a prosperous tavern and inn at the heart of a town by the same name.

For more than two centuries, the inn and farmhouse functioned with varying degrees of prosperity and fame. The inn provided hospitality to travelers when the colony was just a scattering of farms around the very young city of Philadelphia. It is likely the inn attracted traders on the road from the port of Wilmington, Delaware, who were going north to Norristown, Pennsylvania, where barges could take their goods east on the Schuylkill River to Philadelphia. It also seems likely that the crossroads–upon which the inn was built–influenced the making of this home into a tavern and inn.

The King of Prussia, like other historic inns, links us to the day-to-day lives of travelers, inn keepers, and merchants; and to important trends in the commercial and social history of our country. Historic inns, like the King of Prussia, dotted the major transportation routes and were usually located at important crossroads. Their histories are very much tied to the history of the American transportation network. In the course of providing food, rest, and entertainment for generations of travelers, the inn witnessed many events, trends, and ideas that are central to American history. These included the early network of roads and turnpikes that were essential to the rise of Colonial commerce and trade; the comings and goings of armies during the American Revolution; urban and suburban growth that followed the improvement of local roads in the 19th and 20th centuries; and the rise of the modern American transportation network. After extensive efforts on behalf of preservationists and transportation officials to save this structure from encroaching suburban growth, the inn now serves as a wonderful example of the importance of preserving our past for the future.