The Mylin House project was a complete interior restoration project that we had been very much looking forward to doing.  The Willow Valley Retirement Community hired Historic Restorations to restore the first floor of both the original farmhouse and the addition to use as a community center in keeping with their preservation of the original farmhouses from all the farm properties they’ve purchased and expanded onto.

The original part of the Mylin House was built in the late 1700’s by Martin Mylin III and his wife Barbara Baer (granddaughter of Christian and Anna Herr, the 1710 immigrants who built the 1719 Hans Herr House).  Mylin III was the third generation to live on and work the farm his Grandfather, Martin Mylin I, established when he emigrated from Germany in the early 1700’s and became one of the first Mennonites to settle in Lancaster County.  Mylin I would also establish a gun shop on the original homestead where he would father the Pennsylvania Long Rifle as an accomplished gunsmith.

The Mylin house and its lands were passed down through generations of the family until 1926 when it was sold to Christian Herr and became home to the Herr family (some of whom would later found Herr Foods), who resided on the property until it was purchased by the retirement community.

The original portion of the house was built during the Colonial Period and was constructed in the Pennsylvania German Traditional style.  During the Pre-Civil war period in the 1800’s a Victorian style addition was added to the original house.  (We imagine the eight children Mylin III had were motivating factors in the decision to guilt the addition.)

Though many renovations, upgrades, and modernization projects had been performed over the years both the original house and the addition were almost wholly intact.  The interior woodwork and built-in cabinetry by the renowned Lancaster County cabinet-maker John Bachman, the three corner fireplaces, the balusters and the raised panels in the stairway are all original to the house.  While the windows are likely not original to the house, they are from the 1800’s.

While the house looked like it was in good shape, there were some really questionable repairs attempted over the years and we would need to go through and replace everything that wasn’t honestly part of the historical fabric of the original – for both the original Colonial house and the Victorian addition to original condition. 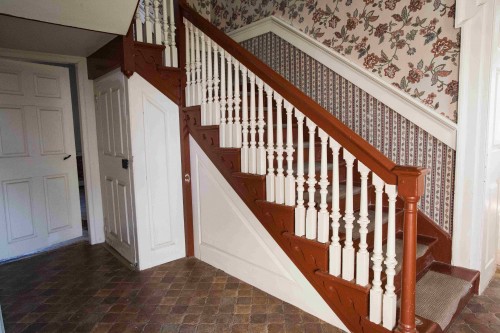 Pretty much all of the woodwork on the first floor of the house was in good condition, but some spot repairs and everything needed restoration.  But before we could even start tackling that portion of the project, we needed to remove all five layers of paint that had accumulated over the last 200+ years – most of which involved lead remediation.  To restore the original interior woodwork we used epoxy and solid-wood Dutchmen for the spot repairs.

There were two built-in corner cabinets in two of the rooms of the Colonial portion of the house that were wonderful examples of traditional woodowork. 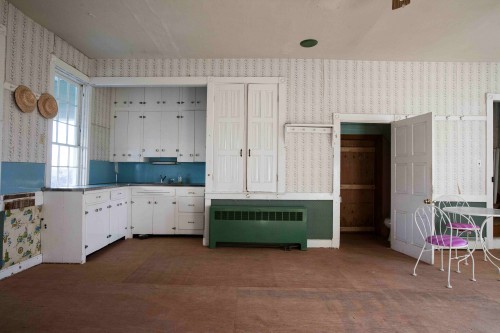 We also re-created a built-in cabinet area in the kitchen of the Victorian addition that had storage cabinetry that was incompatible with the Victorian architectural styles.  The existing cabinets had primitive wood shelves and raised panel doors so we removed them and fabricated cabinets that matched a style on an original built-in located close to that storage area.

The windows in both the Colonial and Victorian sides of the house were not original to the house, but were about 150 years old and mimicked the original window styles well.  To preserve the old growth wood in these windows and their contribution to the historic fabric of the house, we completely restored all the first floor windows and installed interior storm windows on all the first and second floor windows.

That wallpaper that had been applied over the original plaster walls at some point in time was falling off of the walls.  So we carefully removed the wallpaper to keep as much of the original horse-hair plaster intact as possible so we could preserve that plaster.  Some areas of the plaster walls were missing and had drywall installed when misguided attempts to match the original plaster were made.  For these areas, and other areas where moisture had affected the plaster bond we used a three-step application of re-wiring and applying a base coat, then applied a brown coat plaster, and finally a veneer plaster for the finish to create a historically accurate plaster wall.  The plaster ceilings were also restored – some of which was deteriorated to the point that it was about to collapse so we used large washers and screws to re-tighten and fasten the old plaster and then skim-coated over that.  We skim-coated the original plaster walls that could be saved.

There is quite the unusual combination of colors that were chosen for the interior walls in the Mylin House.  These colors may seem rather loud and obnoxious to our modern aesthetics, but they were actually colors on that had originally been on the walls that we discovered after removing wallpaper and layers of paint.  And the smaller sitting rooms at the back of the house that had contrasting colors that didn’t quite coordinate with each other in the manner that we think of today when we choose contrast colors.  Lime green, turquoise, a mustard yellow, a real orange (think The Big Home Improvement Store That Shall Not Be Named orange bucket color), and a dark red.

There was one original color we chose not to replicate – the mauvey rose in the foyer.  Despite Lois’ firm urgings that the color was period appropriate and should be used, Chuck just couldn’t bring himself to add that color back.  (Apparently he can tolerate color combinations like lime green and turquoise, but a mauvey rose along with a dark red is just not something he can accept.)  We chose to use a white color in the foyer that would also be period appropriate as the color of unpainted plaster.

The mopboards in the Colonial portion of the house were painted the black they had been originally.  According to tradition, the floorboards were painted black at that time to avoid having the dirty water marks from mops when cleaning the floors.  In the Victorian addition the baseboards had never been painted black, so we painted them a historical green in an attempt by Chuck to mellow out the red on the walls that his aesthetic sensibilities weren’t entirely comfortable with.

For the paint we used the Benjamin Moore Historical Colors line from Grauers Paint & Decorating in Lancaster.

We also took up the oak floor on the first floor.  We completely re-tongue and grooved that flooring, cleaned it, and then brought it back and re-installed it.  The flooring was left unfinished in the Colonial part of the house, as it would have originally been when it was first constructed.  The restored wood flooring was waxed with Briwax.

For the kitchen floor, we chose a slightly different approach.  There had originally been a wood floor installed during the Victorian period that it was built that was then covered over with several layers of vinyl flooring over the years.  Beyond the difficulty of removing the layers of vinyl flooring to salvage the original floor, the wood used in the original floor was an inferior quality and it was questionable as to whether or not it was worth saving.

Willow Valley Retirement Community eventually decided they wanted to install a brick floor in keeping with a style that seemed well-fitted for a farm kitchen floor and we installed a basket-weave brick pattern using a traditional mortar recipe.  We also chose bricks from Inglenook Tile Design since they reproduce a veneer brick that is such an incredible match to the soft historic bricks by mimicking all aspects of historic brick-making, even firing at the lower temperatures that they would have only been capable of historically.

But before we began floor installation we addressed very big problem with the house – a potentially catastrophic one – the house was sagging in the middle of the interior.  We spent several weeks raising the summer beam, the floor joists, and the load-bearing walls that made up the interior frame of the house to level it up and gain back the two inches it had sagged over the years.  It took about two weeks to get just that two inches back.  After raising the sagging interior frame, we installed ¾” plywood for sub-flooring in the kitchen and installed two metal posts in the floor to hold the summer beam since it was made of an inferior quality poplar wood.

The Mylin House project also involved restoration of multiple fireplaces in both the first floor and the basement.

For the walk-in fireplaces in the basement we applied stucco to encased the loose stone with a natural surface.

Restoration in the Basement

To create a cleaner storage environment for Willow Valley Retirement Community, we parged the stone walls in the basement to waterproof them and eliminated a lot of loose mortar since it was a very early mortar with bits of shell and really wasn’t much more than dirt.  We also poured a concrete floor instead of leaving the existing dirt floor to help with moisture control and keep the storage cleaner.

When we started work there were no windows in the basement window openings – the openings just served as free passage of air.  With our moisture control efforts, we decided to fabricate new windows for those openings – each requiring individualized fabrication since each opening was a different size (a quite common occurrence in historic buildings).

What challenges did we run into with the project?

The biggest challenge was digging out the basement since we did not have wide open access to it and had to dig it out by hand taking the dirt out bucket by bucket.  We filled the trailer with loads of dirt, which then got stuck several times in our unusually rainy Spring.  In fact, not tearing up that yard was probably a challenge that might give hand-digging out the basement a good run for its “biggest challenge” status.