I am young (if we’re calling our 30’s “young” these days) and have only ever known working after labor legislation like the Fair Labor Standards Act, the Civil Rights Act of 1964, the Americans with Disabilities Act, the Family and Medical Leave Act, Equal Opportunity Employment, etc.

In other words, I’ve only ever been a fairly privileged worker who’s enjoyed safe, sanitary, non-discriminatory working environments.  And Labor Day to me has always been about a day off of work where I could relax and get paid for it and backyard BBQ’s where I could enjoy the company of family and friends with a beer in my hand.  It wasn’t until recently, that I started thinking about the history of Labor Day, the history of labor in our country.

In a mere 20 minutes, 146 people were dead – mostly recent immigrant Jewish and Italian women.  15-year-old Ida Brodsky, a Russian Jew who came to the United States only nine months earlier. Jacob Klein, a 23-year-old Jewish man from Russia who had been here for five years. 43-year-old Provindenza Panno, a married Catholic woman from Italy. 15-year-old Bessie Viviano who came to the United States from Italy when she was a year old.

It took nearly 100 years for all of the victims of the fire to be positively identified, with the final six identifications completed just recently, according to the Department of Labor’s website.

Labor Day is no longer just about fun and games for me, it’s also now become a somber remembrance of the American workers who paved the way for me to enjoy the working environments I have been privileged with today.  Yes, Labor Day is still a day of celebrating America’s workforce, an important part of which are the workers who lost their lives before anyone really cared about that workforce.

Further Reading on the History of Labor Day and the Triangle Shirtwaist Factory Fire:

The Department of Labor’s page on the Triangle Shirtwaist Factory Fire: http://m.dol.gov/shirtwaist/

Here’s what happens when a team of military personnel taking a broadcasting class spends a day “shooting” you.

Karri likes to have fun with Photoshop at home late at night when she can’t sleep. Last time she put Tudor chimneys on an Arts & Crafts bungalow. This time, she decided to make a preservation-themed “Hey Girl” meme. We think it’s a good thing she suffers from chronic insomnia and will keep us supplied with preservation memes – very entertaining!

We might celebrate our independence on the 4th of July every year, but we actually declared our independence on the 8th of July in 1776.  In honor of our birth as a nation, our Declaration of Independence is read aloud in Independence National Park on the 8th of July every year.  Watch the video below to hear last year’s reading.
Take a 30-second field trip to the Liberty Bell Center at Independence National Historical Park and learn the (maybe surprising) way our bell came to be called the Liberty Bell. It may have tolled for independence on that fateful day in 1776, but we didn’t call it the Liberty Bell back then.
Yesterday, Preservation in Pink posted one of her “Preservation Pop Quiz” posts that featured some very decorative 3D brickwork.  (If you know anything about 3D brickwork, you might want to pop over there and help us all out – we’re having a hard time identifying the term used to describe making 3D cornice work with bricks.)
While musing about how I would describe that brickwork, I realized it reminded me of the 3D brickwork often seen on Tudor chimneys.  The Tudor architectural style was a type of medieval architecture occurring during the Tudor period in England (late 1400’s to right around 1600).
Most of us have some image we conjure up when we hear “Tudor style”, and for me it is definitely the gorgeous Tudor chimneys.  They really are marvels of human imagination, design, and engineering.  I fell in love with them when I first saw them, and even though my dream house is an Arts & Crafts bungalow – I want a Tudor chimney.
Tudor chimneys on an Arts & Crafts bungalow…. I’m not sure I could convince my husband to give it a try. 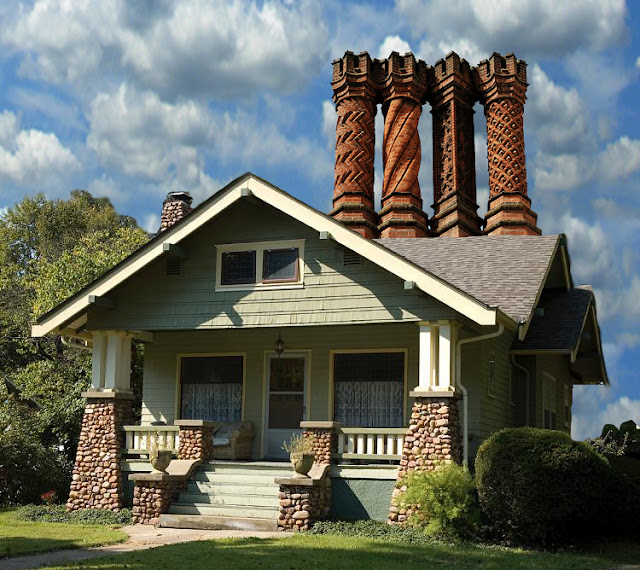 What do the Department of Energy’s superconductivity and hydrogen programs have in common with a postcard collection at Landis Valley Museum? 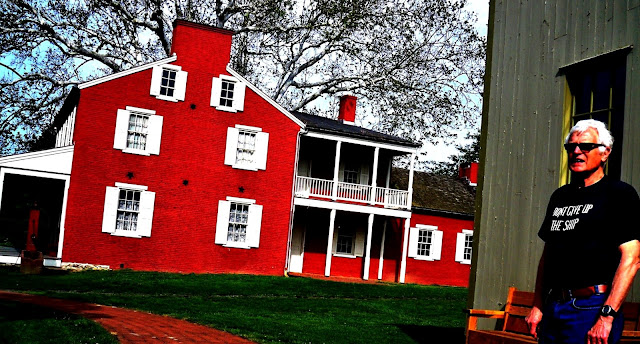 Named Volunteer of the Year in 2011 by the Pennsylvania Historical and Museum Commission (PHMC) for his work on the postcard collection at Landis Valley Museum (administered by the PHMC), Russ isn’t really your ordinary man.  And it isn’t just his distinguished white hair that sets him apart from the rest.

Born and raised in Ohio, Russ earned three degrees in Physics and spent over twenty years working for the Department of Energy. During his time as an engineer at the Department of Energy, Russ worked both in regional offices and at their headquarters in D.C. And as it turns out, it would be a good thing he had those three physics degrees…. Russ worked on research in both the former hydrogen program that explored the use of nuclear fissions in electrical energy applications and the development of high-temperature superconducting materials. 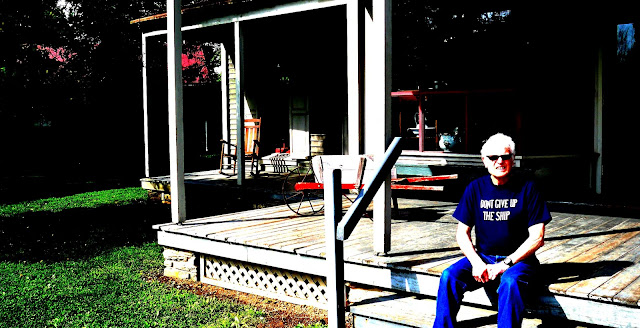 …and a whole new side of Russ began to show. 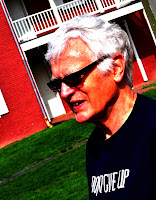 Facing more free time than his career had ever given him, Russ began volunteering – something he hadn’t really done much of before retirement.  One day, when serendipity was apparently floating extra freely in the air, the Curator at Landis Valley invited volunteer Russ into the museum’s gallery to see the various collections maintained at the museum.  While in the gallery, Russ noticed a very large, and very disorganized, postcard collection.

It was love, of a sort, at first sight… 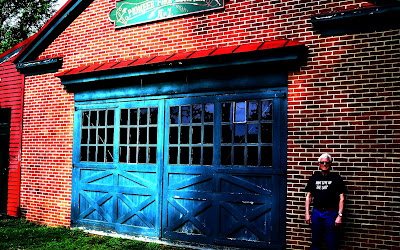 His work often requires research – reaching out to historical organizations and agencies, postcard experts and collectors, tracking down personal histories and information about a sender or recipient, reading up on a particular postcard artist’s style and work, and more. 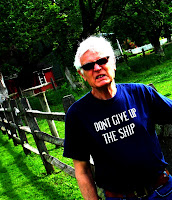 Like the history of the Ferman family that Russ stumbled across as he amassed a set of postcard correspondences between the Ferman family members, particularly from one of the brothers who served in the Navy.  Researching this brother, Russ discovered he could match the exact Naval cruises he made by cross-referencing the cities the cards were mailed from.

Or the set of cards mailed between a woman named Gussie Palmer and a man only known as “Carl” who courted Gussie quite humorously in a postcard romance.  This particular set of cards has stumped Russ – he’s been completely unable to identify who “Carl” is, or even where he’s from.

Russ sees postcards that range from the type of “real photo” postcards that Nettie Mae Landis liked to create and receive, the various postcards featuring the Dionne Quintuplets, to artist-signed postcards by local Samuel Schmucker – who’s cards can demand a price as high as $400+ each. 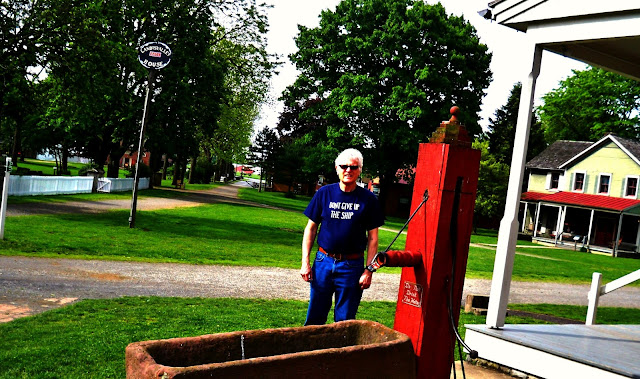 But the strangest category of postcards Russ has seen yet are the postcards that have pictures of lynchings on the front of them.  When I speculated that perhaps that wasn’t any less morbid than the gruesome pictures regularly printed in newspapers, Russ astutely pointed out, “But they wrote ordinary things on the back! So you’d buy a postcard with four dead guys hanging from a tree to say ‘I’ll see you later this week’!” 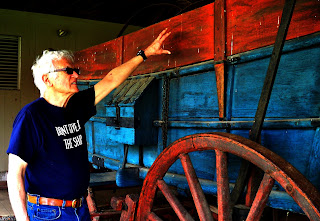 When he put it that way….. yeah, I guess I have to admit that’s a little weird.

The postcard collection isn’t the only work Russ has done at Landis Valley, but his citation from the PHMC for his volunteer work is specifically for his work organizing and preserving the valuable Landis Family correspondences, as well as the bigger hobby collection Nettie Mae collected from people across the nation and around the world that she exchanged postcards with.  The PHMC resolution issued to Russ notes, “Bringing knowledge of the history of postcards to this work, he identified many cards of historic and artistic importance”.

So why does he do it?

“I have a great reverence for things that are old and worthwhile,” he says simply. 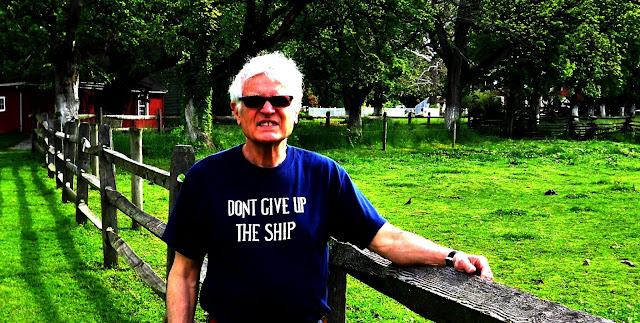 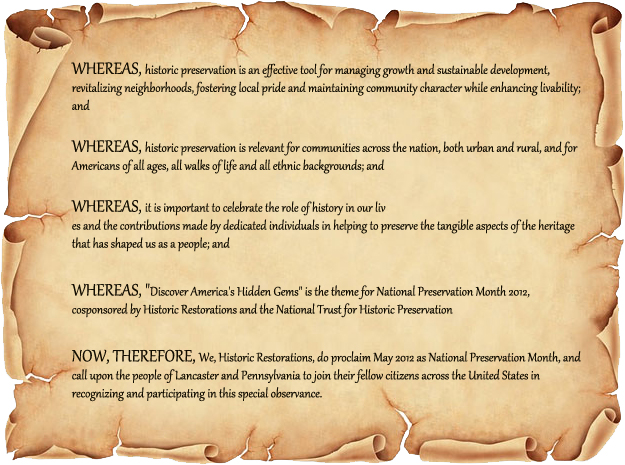 Thaddeus Kosciuszko is a little known hero terribly important to American History.  We hope you take ten minutes to learn more about Kosciuszko with this well-done video created by a student for a National History Day competition.
Seventy some years ago, carpenters working on the construction of the NIH campus in Bethesda made a mere $1.62 per hour.  Carpenter apprentices made even less.  Fast forward to 2011 and carpenters working on the restoration of Building #3 on the campus were paid a prevailing wage rate of $17.44 per hour.
That’s a big difference at first glance.  Though when we thought about the fact that 1938 was almost one hundred years ago, we might have expected a bigger difference in wages between now and then. Which made us wonder: which was really worth more?
On their face values, the current prevailing wage of $17.44 certainly appears to have the greater value. But what of inflation?  It is tempting to quickly (and fairly reasonably) assume that the two incomes are probably fairly comparable in value, given that the cost of living would have risen along with the hourly rate.  But did income and cost of living rise equitably?
And what about the Great Depression?  1938 was at the tail end of the Great Depression and it’s full effect would have been felt deeply across the country.  Would the vast numbers of people looking for work, desperate to bring in the income needed to house, clothe, and feed their families, have driven down labor wages?  On the other hand, perhaps the lack of funds, creating a lack of demand, equally drove down the cost of goods and services?
So which wage rate truly had more buying power: $1.62 per hour wages in 1938 or $17.44 per hour wages in 2011?
The US Department of Labor provides an inflation calculator on their Bureau of Labor Statistics website that answers this very question and inputting our historical data gave us a surprising answer:
Carpenters working on the NIH construction project in 1938 earned wages that were worth more than our carpenters working on the NIH project in 2011.
Which could be read to imply that our current economic climate may have had a more sobering effect on incomes than the Great Depression did.  Which is a thought that had a sobering effect on us.