I am young (if we’re calling our 30’s “young” these days) and have only ever known working after labor legislation like the Fair Labor Standards Act, the Civil Rights Act of 1964, the Americans with Disabilities Act, the Family and Medical Leave Act, Equal Opportunity Employment, etc.

In other words, I’ve only ever been a fairly privileged worker who’s enjoyed safe, sanitary, non-discriminatory working environments.  And Labor Day to me has always been about a day off of work where I could relax and get paid for it and backyard BBQ’s where I could enjoy the company of family and friends with a beer in my hand.  It wasn’t until recently, that I started thinking about the history of Labor Day, the history of labor in our country.

In a mere 20 minutes, 146 people were dead – mostly recent immigrant Jewish and Italian women.  15-year-old Ida Brodsky, a Russian Jew who came to the United States only nine months earlier. Jacob Klein, a 23-year-old Jewish man from Russia who had been here for five years. 43-year-old Provindenza Panno, a married Catholic woman from Italy. 15-year-old Bessie Viviano who came to the United States from Italy when she was a year old.

It took nearly 100 years for all of the victims of the fire to be positively identified, with the final six identifications completed just recently, according to the Department of Labor’s website.

Labor Day is no longer just about fun and games for me, it’s also now become a somber remembrance of the American workers who paved the way for me to enjoy the working environments I have been privileged with today.  Yes, Labor Day is still a day of celebrating America’s workforce, an important part of which are the workers who lost their lives before anyone really cared about that workforce.

Further Reading on the History of Labor Day and the Triangle Shirtwaist Factory Fire:

The Department of Labor’s page on the Triangle Shirtwaist Factory Fire: http://m.dol.gov/shirtwaist/ 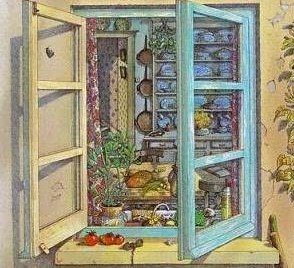 Kitchens are more than just a place to cook our food.  They are usually one of the main family living areas where we gather, commune, play, break bread with family and friends, and sometimes even work with laptop and files plopped on the table so we are sure to stay abreast of all the family’s happenings.

But they weren’t always this way.  In fact, in the late 1700’s and throughout the 1800’s – kitchens were more or less viewed as necessary evils to be tolerated and tucked away as unseen, unfelt, unheard, and unknown as possible.

In the very earliest Colonial America houses, this was accomplished by building kitchens in the basement of homes to keep the hardworking class that worked in the kitchen, as well as all of a kitchen’s rubbish, odors, soot, and smoke as far from the dining and living areas as possible.

Somewhere in the beginning of the 1700’s, kitchens began to be removed from the home and housed in small buildings located a short distance from the main house – something we usually refer to as a “summer kitchen”.  We’ve heard these kitchens were built to save the main house from the extra heat of a kitchen during the hot summer months.

This was, no doubt, a consideration, and probably the primary one for most households.  But as it turns out, it’s not the only one, and probably not the primary one for more well-off households.  This new kitchen architecture in wealthier households seems to have had more to do with race, gender, and social space than it did with the practical considerations of meal preparations for those in the middle to upper classes, as it reflected the growing custom of separating guests and family from slaves and cooks.

While energy efficiency was a dominant concern for one demographic in early America, and a strong sense of social order and place for another demographic, both demographics had one major reason for keeping kitchen spaces tucked away by the late 1700’s.  In the 19th Century, the “Miasmatic Theory” was the dominant disease theory and promoted the belief that offensive odors of decaying materials transmitted diseases, and by the mid-1800’s experts were campaigning to eliminate the causes of foul smells from housing in order to improve public health.

But keeping a house cooler in the summer, keeping the help away from the family and guests, and keeping sickness at bay by not exposing the house to offensive odors weren’t the only things that helped shape the history of our kitchen architecture.   The changing roles of women too.

Women played the role of providers of preventative medicine in their role as housewives, and the new focus on public health and disease prevention propelled women into a new role: domestic scientist.  Early feminist leaders advocated the use of a scientific approach to home management, cookery, and kitchen maintenance – especially as it related to maintaining good health.  The kitchen became viewed as a workshop to be designed and maintained for optimal work quality instead of the utilitarian “evil necessity” they had been as the housewife found that she had a higher calling in the battle against disease.

This new “professional housewife” had a new role, and needed a new kitchen environment to match.  Kitchens were pulled back into the home and placed squarely into the center of family function, as housewives tackled kitchen tasks in this new professional and scientific manner.

And so the modern kitchen was born, as by the turn of the 20th Century the loss of domestic help and advances in time management and public sanitation techniques shaped a new kitchen architecture for America.

Rhonda Sincavage (Associate Director for Intergovernmental Affairs at the National Trust for Historic Preservation) talks about what historic preservationists do, and what they look like (we’re not the little old, blue-haired women most people think of, she points out).  And most importantly, how historic preservation encourages economic growth, incubates independent and small business growth, promotes green building practices and sustainable construction, and builds a sense of community.

Since I put last month’s e-newsletter to bed (obligatory you can sign up here) yesterday morning (hey, that e-newsletter is one wild party animal on the weekends), I’ve started researching this month’s snail-mail newsletter (another obligatory you can sign up for that one here).  We’re delving into the history at Independence National Park in Philadelphia since it’s fresh on our minds from our recently completed project at the Thaddeus Kosciuszko National Memorial.
In my reading about the history of the park and its founding, I discovered that in the early 1900’s when the park was first proposed, the architects decided that the actual setting of Independence Hall wasn’t good enough and set about creating what they determined to be a “fitting setting” by clearing the half-block between Chestnut Street and Ludlow Street in front of the Hall.
So what’s so terribly notable about making it better when we preserve it?  Don’t we do that all the time?  It’s nothing new….
And that is the very point that struck me.  We do it all the time.  We set out to preserve a piece of our history, and along the way we make changes and judgment calls based on our aesthetic preferences.  We don’t always preserve the way something actually looked.  Sometimes what we are actually preserving is our own nostalgic idea of what it would have, should have, could have looked like.
In the case of Independence Hall, early proponents of its preservation recognized that the architecture that surrounded the traditional brick building stood in stark contrast to the iconic structure, what it represented, and what the public’s expectations were regarding its preservation.  So they tore them all down to “beautify” the area and set a proper stage for the feeling they wanted to create.
If we aren’t preserving the way it actually was, is it still historical preservation?  Or is it revisionist history?  What if we we preserve the way the building actually was originally, but disregard what it became over the years? And then I wondered…..if simply expanding historical preservation to include the experiences and perspectives of all the people who lived it (i.e., minority groups like African-Americans, Polish-Americans, and women) is often met with cries of “revisionist history!”, why wouldn’t an actual revision of history be met with such resistance? Is it so important to us to maintain the “reality” of history we have formed in our culture’s collective mind’s eye that we are willing to overlook inaccuracies in one area while we actively seek to create inaccuracies in another?
And perhaps most importantly, what are we losing in our attempts to hold on?
With the creation of a “fitting setting” for Independence Hall, we may have quite adeptly captured the “historical context and character” of the nearly 250-year-old hall that helped give birth to our nation – and there isn’t much of an argument against this, the awe that even mere pictures of the Hall inspire is tremendous something that is without doubt worth every attempt to hold onto.
But what did we lose?  When we cleared away the surrounding “buildings whose diversity is only surpassed by their ugliness” (as an architect noted in the early 1900’s) it is possible we lost a golden opportunity to  showcase the very point of our nation – embracing and valuing diversity without holding any single one as “higher”, “better”, “more desirable” than another?