Kaitlin O’Shea of Preservation in Pink, joined the Practical Preservation Podcast to discuss her blog and how preservation is a part of so much of everyday life. We covered multiple topics, including:

You can read more about Kaitlin, the story behind the blog name, and her little mascot, “Pip,” here.

Kaitlin also has a wonderful series of blog posts on basic preservation information, here. We recommend starting with “Preservation Basics.”

Kaitlin is currently most active on Instagram, and would like to remind everyone that preservation is not about officials telling you what to do with your home; preservation is about valuing what you have.

A few weeks ago an article was posted to the Preservation Professionals group on Facebook. You can read the article here: https://www.rewire.org/how-discussions-of-neighborhood-character-reinforce-structural-racism/.  The article is an interesting discussion of how redevelopment can impact the the neighborhood qualities and characteristics especially in relation to affordable housing.  The example used in the article is from St. Paul, Minnesota and the proposed development of a Ford Motor Company Assembly Plant (closed for over a decade).  A developer purchased the site and proposed an adaptive reuse with 3,800 housing units of those 20% would be affordable housing.  Based on these facts (as I know them) I do not think this is inconsistent with the neighborhood, it is preserving the buildings, and affordable housing is a problem in America that needs a solution.  There are studies that mixed income neighborhoods are mutually beneficial (https://www.useful-community-development.org/mixed-income-housing.html).  The neighbors lived near an operating auto manufacturer for many years and it do not have a negative impact on the property values and I would assume housing would be less disruptive than manufacturing to the surrounding area.

Locally there is a proposed redevelopment of a former hospital site in North West Lancaster (near Franklin and Marshall College).  Reading the numbers of units the developer is proposing (a total of 245 units projected on the low end.  With 120 as low-and-moderate income units) will significantly alter this neighborhood.  I understand that the developer needs have a certain number of units to make the financials work for the project.  Here’s a link to the article from LancasterOnline:

I agree that redeveloping the existing building is positive for the community.  The proposed number of units is concerning to me from a streetscape standpoint.  They are proposing, “Building 25 to 30 row homes for sale along West End Avenue between West Walnut Street and Marietta Avenue, restoring how the block looked before it became hospital parking.”  I am sure there were never 25 to 30 row houses in one city block.  There are traditional row houses in this neighborhood (along with larger single family homes – it was part of the first push to the suburbs from Lancaster City).  The Sanborn Map below shows the neighborhood with the original hospital building (replaced in the 1960’s):

Squeezing 25 to 30 row house on to a single block will change the look of the neighborhood.  The Secretary of Interior Standard #9 states, “New additions, exterior alterations, or related new construction will not destroy historic materials, features, and spatial relationships that characterize the property.  The new work shall be differentiated from the old and compatible with the historic materials, features, size, scale and proportion, and massing to protect the integrity of the property and its environment.”  Any proposed new construction should be required to meet these standards.

There is not a one size fits all answer to development and preservation.  I remind people that zoning and development decisions are made at the local level.  If you want to help shape the development, demolition permission process, or the historic preservation protections you must get involved locally.

Today I am working from home, in my living room, with inaugural coverage running on the TV, a feverish 5yr-old brewing an ear infection snuggled on my lap, and three other children who all have the day off school, one of whom mercilessly and relentlessly practices his basketball dribbling skills despite my pleas for peace and quiet.

Among it all, I am contemplating Martin Luther King, Jr.  (And not just because he’s the reason I’m working in noisy chaos today instead of blissful silence.) 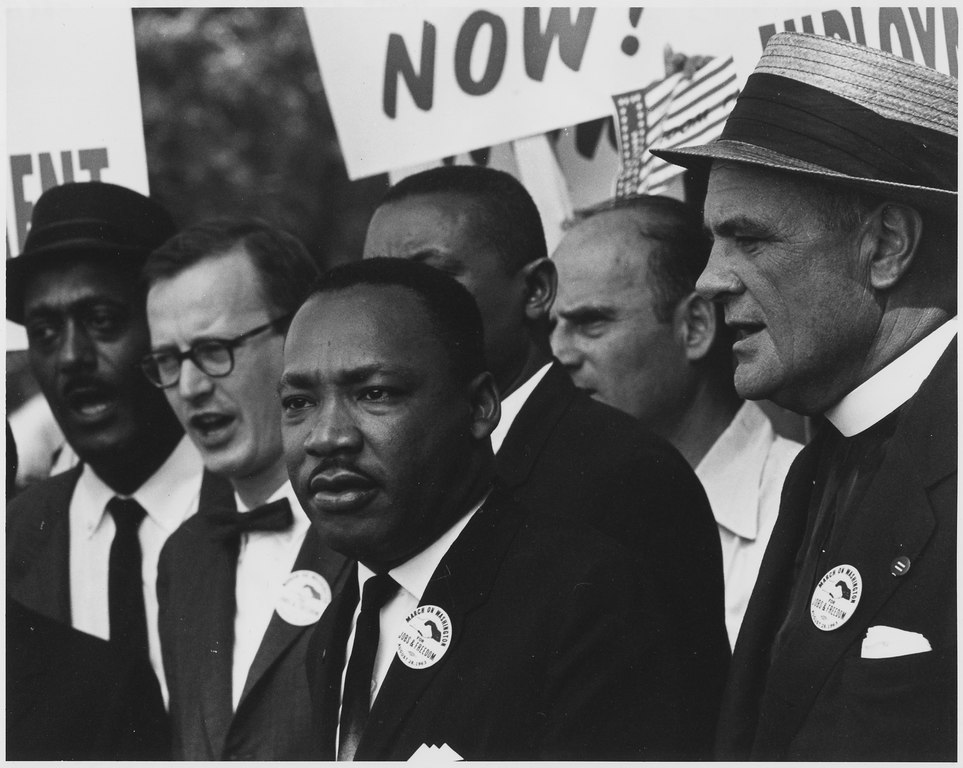 There are so many legacies that King gave us, and most of us are intimately familiar with them all.  We’ve learned about him from the time we were small, adding more and more insight as we grew older, applied that knowledge to our understanding of freedom, equality, revolution, peace.

But what can we preservationists learn from Martin Luther King, Jr.?

We aren’t generally the violent sort and have already embraced his lessons on peaceful protest and civil disobedience.  We already value freedom and equality and aren’t known for our attempts to suppress the rights of others (unless by “others” you mean McMansions).

Then I wondered, but what lessons might we learn if we studied the man and not just his ideals?

Here are the ones I learned thinking about him today…

Maybe sometimes we should be a little less diplomatic and politically correct and just confront things head-on.

Martin Luther King, Jr. was rather blunt in his manner of speaking, he certainly didn’t mince words or dance around difficult subjects.  When King talked about Lincoln and the Emancipation Proclamation in his 1962 “I have a Dream” speech, he said:

If you’ve read MLK at all or listened to him speak (and if you’ve done neither you need to remedy that) you already know he’s good with words, tone, and inflection.  The man was a master orator.  Part of what made his words so powerful was his refusal to pull any punches – he told it like it was, in all its horror, as straight-forward as he needed to be.

He didn’t worry if he was going to offend someone, he didn’t put things in gentle terms or strive to be politically correct in his speeches – he just confronted reality head-on without putting any pretty wrapping paper on it.

[note color=”#f8f8f6″]Questions this made me wonder…

What realities are we preservationists hesitant to confront?

Are we too diplomatic in our confrontations?

Do we dance around difficult subjects for fear of reprisal?

The next time we confront a preservation reality, how can we do so in a more powerful way?[/note]

We should follow our confrontations with powerfully moving visions for the future.

King loved to use stories and metaphors and all sorts of literary elements in his speaking.  When he did so, he engaged the hearts of his listeners and inspired them to challenge the status quo.  And they did.  By the millions.  His ability to articulate a vision for the future that appealed to listener’s values, wants and needs, hopes and aspirations was one of the most effective aspects of King’s leadership.

[sws_blockquote align=”left” alignment=”” cite=”” quotestyles=”style01″]I have a dream that one day on the red hills of Georgia the sons of former slaves and the sons of former slave owners will be able to sit down together at the table of brotherhood. I have a dream that one day even the state of Mississippi, a state sweltering with the heat of injustice, sweltering with the heat of oppression, will be transformed into an oasis of freedom and justice.

I have a dream that my four little children will one day live in a nation where they will not be judged by the color of their skin but by the content of their character. I have a dream today!

Who can read or listen that without tearing up? It’s sheer poetry.  And it isn’t just the use of vivid imagery and powerful storytelling – he’s tapped right into a dream that many of his listeners can instantly relate to, and then he’s given them a powerfully moving vision of the future of that dream.

Are we preservationists using enough stories to communicate our cause?

What stories can we be using to engage the hearts of the people we are speaking to?

What are the dreams of our listeners?

How does historic preservation

Are we articulating the powerful vision we see for the future of our built history?

Are we articulating that vision in a way that makes others want to achieve that future?[/note]

And just because this speech, his voice, the cause he championed, and how it turned out is all so amazing, here is his 1963 “I Have a Dream” speech for your enjoyment today:

Our friends at limeworks.us put together this video about their work on a Victorian house restoration for Alfred’s Victorian Restaurant in Middletown, PA.

History of the House

Middletown is Dauphin County’s oldest community. Located halfway between Lancaster and Carlisle. Quaker George Fisher, on the site of an earlier Native-American village, laid out the town in 1755. Middletown was an important 19th century manufacturing and transportation center along the Union and Pennsylvania Canals, and the Pennsylvania Railroad.

North Union Street was the most fashionable boulevard west of Philadelphia. In the 19th century, Charles Raymond, partner in the Raymond & Campbell Stove Works, built this mansion in 1888. Designed by architect Joseph Dise of SpringGlen, PA. The house is constructed of brownstone from the Hummelstown Brownstone Quarries nearby. Charles W. Raymond eventually overextended himself with the extravagance of the mansion, and in 1896 it became the property of the Middletown National Bank for the benefit of his creditors. In 1898, Redsecker Young purchased the mansion for $6,600.00. Four years later in 1902, Simon Cameron Young bought it. He eventually bequeathed it unto his family, Emma and Eliza whose ghosts, some say, still dwell within. In 1949, Herman and Sara Baum began their twenty-year residence in the mansion.

Alfred Pellegrini of Hershey purchased the Raymond-Young Mansion at 38 North Union Street. The property’s craftsmanship, strength, and beauty gave the Pellegrini family a vision for renovation to create a unique setting for memorable dining. Orginal fixtures were repaired, walnut, cherry and chestnut woods were polished, and stained glass was cleaned to reveal striking beauty. The Burgundy Room’s original wallpaper was restored while the other rooms were covered in reproduction prints

In July of 1970, the restaurant opened its doors for business. It has grown into a Central Pennsylvania landmark and is on the National Register of Historic Places.

Through the years, the back yard has been turned into the chef’s herb garden and dining has been added, al fresco, under the magnolia tree.  Alfred’s Victorian has grown into a Central PA landmark, winning awards of local and national acclaim.  The Pellegrini’s second generation continues the tradition of dining excellence in the Harrisburg area.

Alfred’s Victorian Restaurant is still a cornerstone of the town and current owner Robin Pellegrini was determined to restore it in an appropriate manner while also being conscious of the environmental impact. The LimeWorks.us Technical Install Team went to work using Natural Hydraulic Lime mortars and Lithomex to repair in-kind any damaged or missing brick, stone and mortar.